Congratulations to Melinda Carver for another AWARD for Get Positive Live Positive: Clearing the Negativity from Your Life

Congratulations to Melinda Carver for another AWARD for Get Positive Live Positive: Clearing the Negativity from Your Life

Get Positive Live Positive: Clearing the Negativity from Your Life 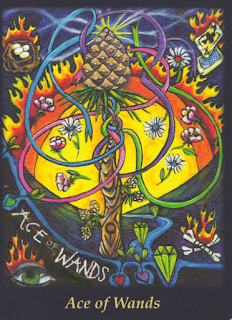 Oh! The rich symbols used in this deck. This is a deck FULL of symbols! Symbols make for a more layered and interesting reading...at least in my opinion.
The very first thing I noticed when I flipped over this card was...the pinecone. This is the symbol for the Pineal Gland or the Third Eye. Next my eye went to the nest of eggs-four eggs, one for each element. There’s a lot of “fire” in this image...wands are fiery so that makes perfect sense. But the #Bonefire image seems to be telling us something more than  what we’re used to seeing in an Ace of Wands. For example, the wand resembles a tree and more than that, possibly a May Pole.This image when considered, does show us the spark of inspiration, that moment when all things come together and form an idea in our minds eye...or our imagination. I like this card so much! There are the jewels or crystals in the water, the all seeing green eye, the ace of clubs...so many symbols to see here.This card also gives me the feeling that everything truly is connected, one idea flows into the next. Perhaps this not so traditional image of the Ace of Wands holds some deeper meaning for you.What spark of an idea have you noticed today? When you gaze at this image do you hear a whisper of an idea? Perhaps you “see” something that gets your creativity going? This is a card that indicates a spark, the very energy of the new idea.
Blog post by Mary Nale for Attune Magazine
Bonefire Tarot
by Gabi Angus-West
Schiffer

The Bonefire Tarot is a vibrant reimagining of the Rider-Waite, painted in a style influenced by vintage tattoo art. It's inspired by the symbolism of the 'bone fire', a time for ritual celebration, cleansing, rebirth and renewal. 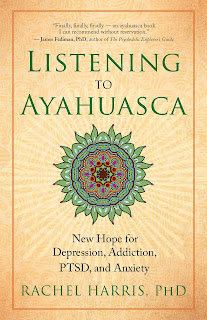 Foundations of the Esoteric Tradition:: Tarot of the Holy Light, Volume Two (Volume 2)

Foundations of the Esoteric Tradition:: Tarot of the Holy Light, Volume Two (Volume 2) 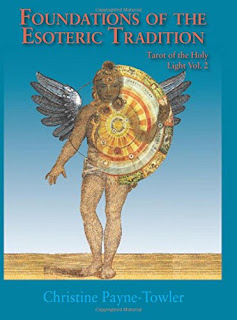 Foundations of the Esoteric Tradition is Volume Two of a pair of texts produced to support Tarot of the Holy Light Tarot. Volume One is entitled Tarot of the Holy Light; A Continental Esoteric Tarot. This volume traces the historical framing that supports all the operative arts of Western Esotericism. The charisma imparted by these intellectual currents, dating from antiquity to the Enlightenment, has powered Tarot’s popularity within both esoteric and secular circles. Chapter 1 addresses the essential quality that underpins all the esoteric traditions. This is called clairvoyance, referring to the unique magical imagination with which historical magi of every age are endowed. Chapter 2 demonstrates the mathematical matrix of ancient Astrology, which comprises the root source for all of the operative vocabulary employed in the Western Mysteries. Chapter 3 recounts how the modern alphabet was invented by ancient astronomers to carry numeric and astrological data within the individual letters. This provides the philosophical foundation of both the Hermetic philosophy and the Kabbalah, twin monuments of the decimal mysticism studied by the Greeks and Hebrews. Chapter 4 traces the growth of Kabbalistic thought among the magical Christians of the Middle Ages and Renaissance. Chapter 5 demonstrates the Tarot cards as a visual catalogue of interlocking traditions. Alchemical implications of the Doctrine of Essential Dignities are developed on the Pips. Chapter 6 focuses on Jacob Boehme’s masterful insight into the Planetary Properties, revealing their esoteric and theological fundamentals. Astrology’s alchemical interrelations are projected upon the Kabbalah Tree to explicate the astral body of the practitioner. Chapter 7 examines the alchemical worldview, lifestyle, and self-cultivation approach associated with Boehme’s “Yoga of the Restitution”, with illustrations created by Boehme’s students. Chapter 8 summarizes the magnificent synthesis that Boehme revealed, which was gratefully taken up by the Rosicrucian and Masonic movements that followed, though experts are still struggling to fully comprehend its significance to this day. This volume will be of interest to people from multiple backgrounds since it touches on the common threads that interweave to form our Western magical tradition. True to its name, Foundations of the Esoteric Tradition illuminates the insider vocabulary and technical praxis that have puzzled, frustrated, and yet intrigued so many for so long. Historians of Western esoteric currents will find answers to many long-standing questions in these pages, written by a lifetime practitioner of the astro-alpha-numeric synthesis.

Email ThisBlogThis!Share to TwitterShare to FacebookShare to Pinterest
Labels: #AttuneMagazine, Esoteric, Tarot of the Holy Light

Jordan Sather has put together a video discussing how we can identity Cognitive Dissonance  in ourselves and others.  There’s hope for those who can only see their own truth...I think he did a great job explaining the importance of becoming aware of this.

For more articles and videos please visit Attune Magazine
at 7:51:00 AM No comments: